Register here to get your personal account and profit from all the advantages of the individual search functions.
X
Join our newsletter to get news and upcoming offers >
Details location 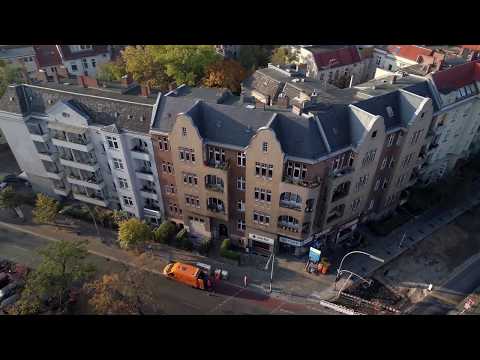 Raised in 1904, this stately period building on the corner of Feuerbachstrasse and Thorwaldsenstrasse is a worthy testimony to Belle Époque elegance. A patrician gem, the corner building is located in the northern part of Steglitz-Zehlendorf, one of Berlin’s most bourgeois boroughs.

The elegant vintage building complex divides into 2 commercial units an 19 charming and generously proportioned period flats of two to six bedrooms. With footprints of 59 to 177 square metres, the apartment building suits various domestic arrangements. Indeed, the dwelling units in the building, which was built more than a century ago in a mansion district, and which now stands out among its urban and cultural environment as an engaging historic corner building, are suitable for singles, couples and families.

Plaster ornaments, parquetry, historic double doors and sliding doors, double-cased windows, the tall ceilings typical for the Belle Époque, and tub-equipped bathrooms are characteristic features of this glamorous period building on Feuerbachstrasse. The ground floor is occupied by three commercial units that are part of an attractive location whose footfall is generated by the -Feuerbachstrasse- rapid-transit station nearby and the proximity to Schlossstrasse, one of Berlin’s leading shopping streets.

Virtually all of the flats feature at least one balcony and in some cases two. The roof terraces of the four attic apartments, which face the inner courtyard, offer a view across the rooftops of Steglitz and the locality of Friedenau. The flats are accessed either via the historic stairwell or via the lift recently installed on the side of Thorwaldsenstrasse.

The flats are heated via a gas-fired central heating system. Fit-out features also include separate kitchens, some of which come with storage rooms.

The residential building on the corner of Feuerbachstrasse and Thorwaldsenstrasse lies in the north end of Steglitz on the district boundary of Schöneberg and is part of the beautiful Bismarckviertel quarter, whose streetscape is largely defined by stylish buildings from the Belle Époque. The borough of Steglitz-Zehlendorf has a reputation of being bourgeois and comparatively affluent.

Its central artery is the well-known Schlossstrasse, and a ten-minute walk from Feuerbachstrasse will take you there. It has always been considered a major high street in Steglitz and is one of the most prominent retail locations in Berlin. During the Zero Years, four high-standard shopping centres with modern retail assortments were created in conjunction with a revitalisation drive. They are supplemented by a large number of boutique stores in the side streets and a richly varied gastronomic line-up.

The dense retail offer blends smoothly with the streetscape in this south-western borough, and is supplemented by other amenities, including cultural ones, to form a well-rounded whole of high livability. Cultural venues here include time-honoured institutions like the legendary Schlosspark-Theater, Schwartzsche Villa and the Adria Filmtheater, a vintage cinema. But anywhere you go in the district, you will find avenues, parks and green areas, whose greenery lends a recreational atmosphere to the entire area. Several public swimming pools, including an outdoor one, are located in the area and there is even a planetarium nearby.

Steglitz, a bourgeois idyll with metropolitan flair, offers a quiet way of living while being right in the middle of the city. Although the share of native Berliners is comparatively high here, a growing number of recent arrivals to Berlin are attracted to Steglitz, and this is explained not least be the district’s proximity to the Free University and the campus of the Benjamin Franklin teaching hospital.

Benefit from our competence! Our team of consultants has accumulated many years of professional experience and detailed knowledge of every single estate – our foundation for a successful consultation.

Our variety is your advantage. We can offer a wide range of apartments in various sizes, locations and set ups. Let us help you find just the right property for you.

Time and quality information are key to successfully finding the most suitable property. We are happy to take time for you and to explain the acquisition process to you step by step beforehand.

We individually assist you with your purchase of a condominium either for capital investment or for personal use and support you in choosing the suitable property from our extensive portfolio.

We developed the Accentro Homeownership Report that has been providing comprehensive information about homeownership transactions in all 82 major German cities since 2008 and offers a reliable basis for decisions.

We offer years of experience and competence in consultation to your advantage. Benefit from our expertise and our wide range of condominiums.

We assist you with all kinds of questions concerning homeownership und are happy to help you individually: in person, via email, on the phone or through Skype.